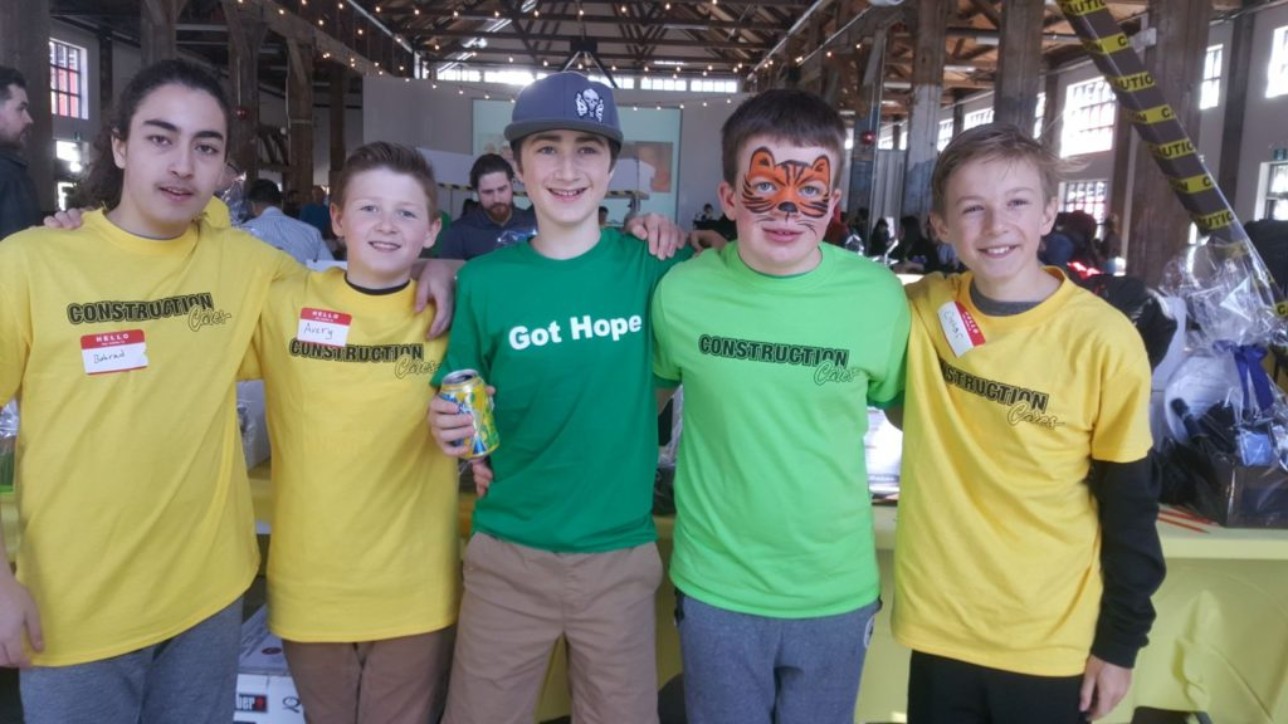 Construction Cares, an indoor fair for adults & children of all ages with net proceeds going to the MPS II Research Fund, happened this past weekend and it was incredible! These events never fail to touch our hearts and souls at the deepest level.
When Joe Geluch, President of Naikoon Contracting (the company that built our house), approached me last summer after getting to know our family through the build of our house, to put on a fundraiser for our MPS II Research Fund, I thought it was a kind gesture, but never did I have any idea that it would be brought to fruition. Fruition was Sunday, April 22, 2018.
$24,000 was raised for our Fund. For research. For our boys with MPS II. I don’t give as many updates on Trey as I did when he was first diagnosed, and although Trey is mostly stable due to the IV & IT treatments he receives, our life is still far from typical. It’s hard to describe, to a large group of people, what our life is like unless you see us regularly. What do you focus on? What and how much do you say? Trey’s progression due to the build up of GAGs as a result of MPS II is minimal to none after he began receiving Intrathecal ERT over seven years ago, but he still has MPS.
This past year, two issues have arisen for Trey that at times have gotten me pretty down:
One, we found out Trey has Obstructive Sleep Apnea (OSA). There’s no surgical treatment, no cure and since November 2017, we’ve been working with his Behaviour Analyst to get him to wear a C-Pap machine at night. Due to his OSA, Trey is tired most days and now due to our routine trying to get him to wear a C-Pap machine at night, misses most of his night time activities like floor hockey, bowling and softball, which he loves. If he doesn’t learn to tolerate the C-Pap machine, that could lead to heart issues due to lack of oxygen when he obstructs.
The second, which has a longer history than a year but we thought was resolved, is a severe limp with no known cause, other than MPS (he has hip dysplasia as a result of MPS). It was awful to the point of Trey not being able to walk for weeks at a time last summer, but somehow resolved on its own. Then a week ago, it came back with full-strength after the one activity he still participates in because it’s early enough to get him home for his C-Pap routine, soccer. He could barely walk (I contemplated a wheelchair because I don’t think he could use crutches) from Monday night until Thursday morning and then was fine. Sunday night after Construction Cares, the limp was back. Avery and Sadie helped carry him back to the couch when he’d try to get up. It is so hard to see. We now might have to take him out of soccer. His life is already limited by MPS cognitively, with multiple trips to hospitals here and in North Carolina, and with weekly infusions, it gets me down to see his quality of life (which I think is pretty good, he might just be the happiest member of our family) further impacted by MPS.
I say all this with the hopes of you understanding just how much it means to our family that you showed up yesterday, in whatever form that was. MPS can be sad and hard and lonely and it is you who lifts us up when we are down. Even to those of you who couldn’t make it but sent a text, that matters. You remembering matters. You asking how we’re doing despite us being twelve years into this journey, matters. To all who came and donated and volunteered and sponsored and attended as guests, you honestly fill our hearts. You make it so we can pick ourselves up and say “We’ve got this. We can do it. We are surrounded.” Ryan and I left Construction Cares last night knowing we’d never be able to fully express how thankful we are. We didn’t get to thank each of you and even if we did, it wouldn’t be enough. I hope my words can in some small way help you know what it means to us that you came.
Thank you to everyone from Naikoon who volunteered. It was SO cool and overwhelming to walk into The Pipe Shop and see all these people we know, all these people who began conversations with us years ago about building a sustainable and durable house for our family, to the people who actually built our house and know the guts of our house better than we do, to the people who emailed and organized and showed up for the build of our house when we had questions, and to the people from Naikoon we didn’t know until this fundraising began! We are so touched by how involved you all were. It took a team. Thank you.
And an extra special thanks goes out to Madeleine Funk, Tyler Waddell, Pamela Buck and Joe Geluch. Gosh, when I think about how stressed and anxious and insanely driven I was putting on other events, and then I think of what you all did for me, for us yesterday, I am forever grateful. Joe, we will never EVER forget what you have done for us.
We will share more pictures from the event in the coming weeks, and here is a link to a CBC video, our clip starts at 10:34: http://www.cbc.ca/player/play/1216906307541.
With love,
The Purcell’s