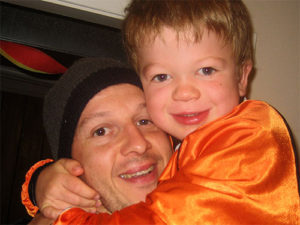 TREY ARTHUR CEHAK PURCELL was born 19 minutes away from the leap year on March 1, 2004, his due date. Labour began early Saturday morning with Trey finally arriving in the wee hours of Monday, after a long and awesome labour. During the first hours of my labour, Ryan and I ate, went for walks, watched movies and anticipated the birth of our first baby. We were so excited. Trey’s birth was originally planned to be at home, but 35 weeks into my pregnancy, Trey was found to have a Premature Ventricular Contraction (PVC). Although it was not serious, we were no longer comfortable giving birth at home. Trey was welcomed into the world at B. C. Children and Women’s Hospital.

Life after Trey was born was great. Actually, it was the best time in my adult life. Watching Trey grow and just watching him see life for the first time was so amazing. Everything was new and fascinating. At first it was watching butterflies, feeling new textures, learning to crawl and walk.  Still now, nothing could be better than being a mom. We continue to play and explore – feeding squirrels at the park, splashing in water, riding bikes, climbing trees, and seeing how high and far Trey can jump. We have so much fun! When Trey was just over a year old, and before we’d even heard of MPS, we found out that we were pregnant for the second time. On November 5, 2005, after a very short and easy labour, Avery was born at home. Trey woke up Sunday morning to a new little brother and welcomed him with big hugs and lots of kisses.

Trey is an incredibly easygoing kid. He’s interested in whatever is going on around him and goes with whatever is thrown at him. He adjusted easily when Avery and Sadie were born, he had no trouble moving into a new house, and the nurses and doctors at the hospital continue to be amazed at how easily Trey goes along with infusions, exams, tests and more.  Essentially, Trey makes parenting easy on us.

Trey also makes life fun because he loves people. I have met many new people because of Trey. He watches people, talks to people, smiles and waves at everyone we pass, and he always makes sure everyone is included. Whether we’re out for a walk and someone is lagging behind, or playing a game that someone is not interested in, Trey will be sure to point out that someone is behind or not included. Picking berries, digging in the dirt, climbing and jumping off of everything and anything, reading Archie comics, playing games with Avery and Sadie, drawing, and playing with our huge and awesome extended family are other favourite past times of Trey’s. Trey also always has a ball or puck in his hand. Whether he’s shooting hoops, playing soccer, throwing a football, or hitting a puck into the net, Trey is playing ball.  Water is another favourite of his. He loves to go swimming with our family on the weekends and could spend hours at the pool.  He loves jumping off docks into lakes and oceans, and splashing in anything that resembles a puddle.

Life is just so much fun when you’re around Trey. He shows you what it means to live, to have trust, and to love.

February 2006 was the first indication to us that anything was seriously wrong. Before that there had been minor concerns, but no red flags. Trey was a big kid, in the 99th percentile since birth, but he comes from a tall family, so we didn’t think anything of it. We also took Trey to the pediatrician with concerns about a hernia and big head at around 9 months. Our pediatrician wasn’t really concerned about either, as both are common childhood issues, but he said that we could do an ultrasound to investigate the head size if we wanted to. We did, and the ultrasound showed nothing wrong. Our pediatrician also assured us that the hernia would probably go away by the time he was three, and if it didn’t, a minor surgery would fix the problem.  Trey’s speech also seemed to be developing a bit slowly, so when he was 16 months, I contacted a Speech and Language Pathologist.  This led us to the Audiologist and an ENT who confirmed that Trey had hearing loss, probably due to recurrent ear infections and fluid in his ears. As a result, on January 17, 2006, Trey got tubes put in his ears and his adenoids taken out. Around the same time, we began looking for a new pediatrician whose values more closely resembled ours. On Tuesday, February 14, 2006, we had an appointment with Dr. Paul Thiessen, who came highly recommended. The appointment was going to be a quick stop for us. Afterwards, we planned to drop the kids off at home with grandparents so that Ryan and I could go out for a nice Valentines Day dinner.

It didn’t turn out that way. I will remember the details of that appointment forever. In short, we were told Trey might have an enlarged liver. Trey was scheduled for an ultrasound at Children’s Hospital on Thursday, and on Friday, Dr. Thiessen called and told us that his liver and spleen were, in fact, enlarged. He had also booked us an appointment with a specialist at Children’s Hospital for that Monday. Knowing how long it usually takes to get appointments at the hospital, we were scared that something was seriously wrong, but with no more information and no way of knowing what the results this far meant, we tried to convince ourselves not to think about it until Monday. Monday is the day our world came crashing down. What I remember about that day is: before the appointment I was not able to make eye contact with Ryan. Any time we did, we would cry. During the appointment we were told that our child likely had something called Muchopolysaccharidosis (MPS).  We were told that this would affect every part of his body.  Specifically, we were told that Trey’s hands would curl, his bones wouldn’t grow properly, his organs would start to fail and his life span would likely be shortened significantly. For about 2 weeks, we cried.  We cried and cried until we were so exhausted, we didn’t have the energy to cry anymore. After a while, all the tests at the hospital became a blur. Everything became divided into before “the appointment” and after. Very little is the same, but at the same time, it is all the same. What I have realized is that nothing in life is guaranteed. Every checkup and infusion reminds us of this and as a result, we have learned to and are reminded to appreciate every moment of our lives together. In a way, we’re lucky. We are never allowed to be complacent, or at least not for long, until a reminder comes along. We are not able to forget how lucky we are to be able to have kids, to have family and friends who love us, to have each other, to have a house to live in within a beautiful country, province and city, to enjoy life, to have healthy food to eat, a good job. We don’t have the luxury of being able to take those things for granted. It is interesting though, because Trey’s difference may be progressive, but so is life. We’ve got to enjoy it while we have it. We love Trey. We loved him before and we love him now. That has not changed, but what has changed is the realization that we love him no matter what. He is our son and none of the other stuff matters.

We have also learned to take information with a grain of salt. Months after Trey’s diagnosis, we were told by one doctor that Trey has a severe form of Hunter Syndrome – that he will be mentally impacted, decline into a vegetative state, and will be lucky if he lives into his teenage years. But we were also told by another doctor that he might not be mentally impacted because he was doing so well.  In July 2009, when we travelled to the University of North Carolina to find out if Trey qualified for an Intrathecal Trial that would put the missing enzyme directly into the brain, with the goal to help those kids with MPS II whose brains were affected, we were told that Trey’s brain was, and would always be, fine. After over three years of wondering and waiting, our relief came. And then one year later, cognitive tests showed that in fact, Trey’s brain was not okay and he would need intrathecal enzyme. MPS is a rare disease (or difference as we like to call it). Most people have no idea what it is, and many of the specialists we see also have never seen a person with MPS.  Some things are known about the disease, but not everything. So what we have decided to do is believe and hope. Watching Trey doesn’t make that hard. We believe that Trey is going to be okay.

We believe that through nutrition, alternative forms of medicine, and Enzyme Replacement Therapy (called Elaprase in MPS II- both intravenously into the body and intrathecally into the brain), Trey will live a long, happy and fulfilled life. We celebrate that IV Elaprase is available and that Trey is able to access it and we celebrate that Trey qualified for phase I/II of the IT Elaprase trial in North Carolina. Not long ago, no treatment was available. We continue to talk with Trey about what he wants to be when he grows up. And we believe that with the help of fundraising, awareness, and research, we will find a cure so that Trey and other children with MPS will not be limited by this difference, and so that families will not have to go through the devastation that we have.